What Do You Know About Trurkey?
Turkey, country that occupies a unique geographic position, lying partly in Asia and partly in Europe. Throughout its history it has acted as both a barrier and a bridge between the two continents.
Turkey is situated at the crossroads of the Balkans, Caucasus, Middle East, and eastern Mediterranean. It is among the larger countries of the region in terms of territory and population, and its land area is greater than that of any European state. Nearly all of the country is in Asia, comprising the oblong peninsula of Asia Minor—also known as Anatolia (Anadolu)—and in the east, part of a mountainous region sometimes known as the Armenian Highland. The remainder—Turkish Thrace (Trakya)—lies in the extreme southeastern part of Europe, a tiny remnant of an empire that once extended over much of the Balkans.
The country has a north-south extent that ranges from about 300 to 400 miles (480 to 640 km), and it stretches about 1,000 miles from west to east. Turkey is bounded on the north by the Black Sea, on the northeast by Georgia and Armenia, on the east by Azerbaijan and Iran, on the southeast by Iraq and Syria, on the southwest and west by the Mediterranean Sea and the Aegean Sea, and on the northwest by Greece and Bulgaria. The capital is Ankara, and its largest city and seaport is Istanbul

Of a total boundary length of some 4,000 miles (6,440 km), about three-fourths is maritime, including coastlines along the Black Sea, the Aegean, and the Mediterranean, as well as the narrows that link the Black and Aegean seas. These narrows—which include the Bosporus, the Sea of Marmara, and the Dardanelles—are known collectively as the Turkish straits; Turkey’s control of the straits, the only outlet from the Black Sea, has been a major factor in its relations with other states. Most of the islands along the Aegean coast are Greek; only the islands of Gökçeada and Bozcaada remain in Turkish hands. The maritime boundary with Greece has been a source of dispute between the two countries on numerous occasions since World War II. 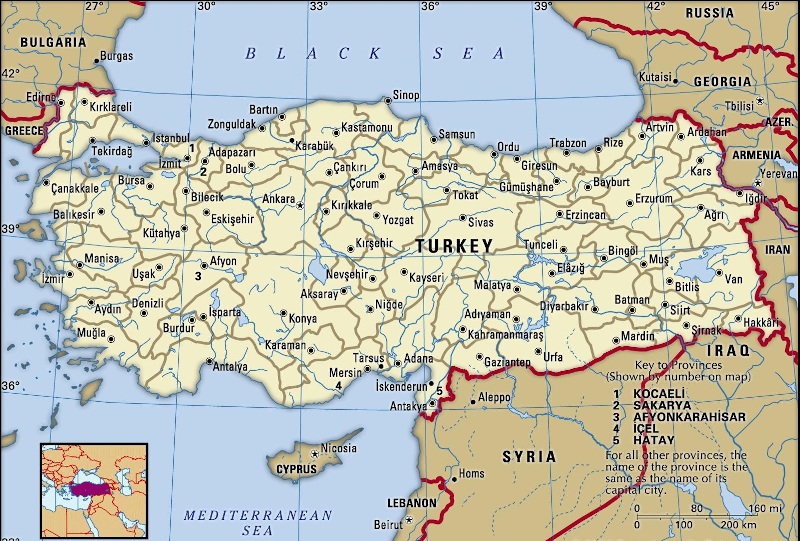 The total surface area within the borders of Turkey comes to 783,562 square kilometers, In combination with a population of 81.92 million in 2018.
The Turkish language is established as the official language of the country. The language is also the most spoken in the country. More than 30 ethnic languages exist in Turkey, but only small numbers of people speak a few of the ethnic languages. With the dominance of the Turkish language, other languages are regarded to as minority languages.
Languages within Turkey can be divided into various groups depending on their origin, the number of speakers and the nature of the language. The common divisions are the ethnic languages, immigrant, foreign, and sign language. These languages are under the influence of the ancient and modern interactions between local Turks and foreigners during the various phases of Turkish history.
One of the most prominent empires to rule was the Ottomans.  If you go to Istanbul, visit the former home to rulers of the Ottoman Empire, Topkapi Palace.
They ruled for approximately 900 years however by the year 1918, the Ottoman sultans sided with the losing countries of the First World War and the Anatolia region was due to be separated for ruling by the winning countries.
This prompted the war of independence led by Mustafa Kemal Ataturk. The war  was won in 1923 so independence was declared and the Republic of Turkey was formed. One of Mustafa’s first decisions was to move the capital, formerly Istanbul to Ankara in the center of the country. 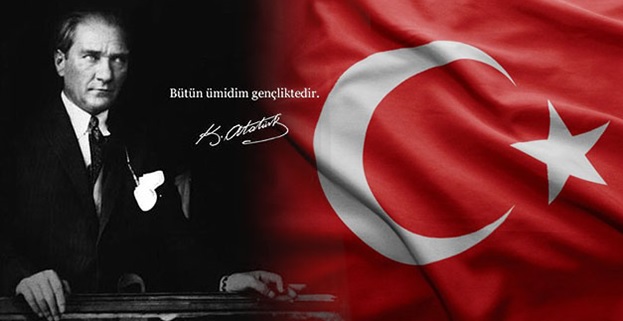